In a fun children’s book “We are growing” by Laurie Keller, a dandelion is described as the dandiest weed. It is, indeed. Fluffy yellow dandelion flowers add neon-colored brightness to spring lawns and fields. The flowers attract bees and other pollinators. Some even liken the dandelions to daisies: maintenance-free splashes of color. However, dandelion leaves are wide and sprawling, shading out neighboring grass. Left to their own devices, dandelions may over time supplant large patches of a lawn. What are we to do with these pretty but insidious plants? 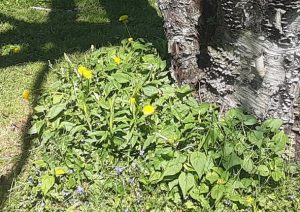 Surprisingly, dandelions are herbs, just like parsley and dill. The most common species of dandelions around the world is Taraxacum officinale, which has delicious leaves, when added in fresh salads. The leaves are powerful and abundant antioxidants, stimulating cell regeneration and thus slowing down aging. Dandelion leaves have also been shown to help reduce cholesterol and aid weight loss, regulate blood sugar in type II diabetics, reduce inflammation, lower blood pressure, boost the immune system (particularly useful in our current times) and lower the risk of cancer. In addition to tasty leaves, dried dandelion roots make a potent tea with largely the same benefits. Dandelion tea made from dried roots is a great way to ingest the plant’s vitamins in winter, when fresh leaves are not available. Some people even swear by dandelion wine made from the flowers, ready in 2 to 3 weeks, and yet another way to imbibe dandelion nutrients.

The name “dandelion” comes from Latin dens leonis, or ‘lion’s tooth’, the shape of the jagged edge of dandelion leaves. Today’s most common species is said to be native to Europe and brought over by the colonists. Native Americans recognized the medicinal properties of the plant and embraced dandelions from their early days in North America.

Many others, however, were not impressed, especially those whose goal was a perfect lawn. Chemical companies took notice and the most vicious herbicide was born: RoundUp, broad-spectrum glyphosate-based chemical. Glyphosate causes dandelion cancer: the plant cells start growing so fast, that its roots and stems explode and cause the plant to die. Today, glyphosate is the most widely used herbicide in the United States. Its application is so broad that it has been shown to seep into the drinking water, ponds, lakes and even the ocean. In addition to its effect on dandelions, glyphosate is now considered very harmful to humans and is said to be an ingredient in the toxic soup generating unbearable algae in Lake Agawam and other ponds in the Hamptons and beyond. Limiting and eliminating RoundUp use could potentially slow down and possibly reverse the pollution of the water bodies on Long Island and other areas.

However, what does one do with the dandelions on their lawn without glyphosate? Some resort to mowing the lawn every three to four days during the high dandelion season to stem production of white fluffy heads of seeds that spread easily with the slightest breeze. Others swear by digging, even though dandelions proved to be hard to remove. With roots often reaching a foot or more, digging out dandelions completely is not easy. Even so, removing the root even two inches or more, will slow the growth and the spread of the plants. A sunny spring morning or an afternoon of dandelion hunting following extensive showers to soften the ground will bring heaps of delicious and nutritious fresh salad leaves, as well as roots to last all winter long.