Privet (Lugustrum) is almost synonymous with the Hamptons. Surrounding beautiful estates and homes, privet hedges afford much needed privacy to residents and guests in the summer season. Accenting pools and pathways is also a popular reason to add privet to gardens. In winter, the plants deliver a measure of security — when the privet leaves fall off, the hedge allows for some transparency to ensure that animals are not lurking nearby.

Native to Europe, Asia and Australia, privet has been a staple of Western Civilization for millennia. Pliny the Elder (23-79 AD), a Roman author and naturalist, included Europe-native Lugustrum Vulgare in his Naturalis Historia, the first anthology of plants and a standard for modern encyclopedias of all kinds. In England, privet became a popular alternative to the iron fence in the 19th and 20th centuries.

The most common variety of privet today, both in Europe and in the Hamptons, is a semi-evergreen Lugustrum Vulgare followed by a more evergreen Lugustrum Ovalifolium. Unlike L. Vulgare, L. Ovalifolium, also known as California privet, is native to Japan. In the summer, privet produces cream-colored flowers that are followed by black berries. Privet berries are eaten by birds, but can be mildly toxic to humans. Both berries and leaves can be toxic to animals, making privet less appealing to deer, an added advantage in the Hamptons.

Tea enthusiasts might be intrigued by privet bark tea, used extensively in Chinese medicine to treat a range of human digestive and skin disorders as well as to support nutrition during chemotherapy.

Perfectly trimmed, privet hedges form a beautiful dense wall of greenery. Occasionally, however, the hedges are woody and thin, with large old stems taking over the place of foliage. Some causes for such hedges may include insufficient sunlight, and poor or dry soil, although well-established privet develops one or a few extremely deep roots digging into the soil for several feet and ensuring supply of nutrients and water in most weather conditions. Another common problem leading to the less-than-perfect privet is lack of pruning. 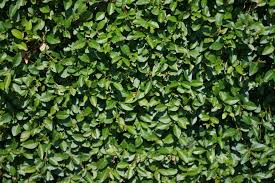 Pruning is different from trimming. Pruning usually refers to the heavy-handed slashing of various branches. Performed correctly and timely, as described below, pruning stimulates privet growth and makes plants flourish with the perfect dense foliage. Trimming, on the other hand, is most often about the shaping of the leafy surface into a desired form, typically, a boxy rectangular hedge. In Southampton, privet hedges are expected to be trimmed at least once before the American Independence Day, the Fourth of July, and subsequently throughout the summer and early fall to ensure dense foliage and neat appearance. While the privet flowers can be considered interesting and are even used in floral arrangements in Europe, Southampton hedges are expected to stay green, without many flowers that sometimes pop out of the otherwise perfect shape. Without trimming, privet can grow 2 feet per year.

In addition to the summer trim, however, privet hedges need serious pruning in winter months, but only every second year. The goal of pruning is two-fold: 1) cut down branches that grow straight up, and 2) cut down old growth.

The branches that grow straight up typically do so in the middle of the hedge. They are shaded out by their immediate neighbors and are reaching for the sunlight at the top. While their growth may seem irrelevant to the density of the hedge, once tall and trimmed on the top, the straight up branches will split into a canopy of leaves. That canopy will block the sun for the rest of the plant, making other branches produce fewer leaves and resulting in the hedge that is thin in appearance. As a rule of thumb, the straight-up branches are cut down to ⅓ of their length.

The thick old stems also present a problem as they are not as likely to produce new branches with leaves as their younger counterparts. When left to their own devices, old growth stems eventually shade out other branches and then rot when the smaller number of leaves and their lower photosynthesis activity fail to nourish the plant. The old-growth stems need to be cut down to ⅓ or ⅔ of their original height to promote the growth of new branches, but also to maintain a natural look of the hedge.

The privet hedges pruned in winter produce healthy new growth in the spring and thick foliage in the summer. The results are splendid Southampton hedgerows.